ICC has announced their Team of the tournament for World cup 2019, and there are two Indian Players included, Here is the complete list of Players. 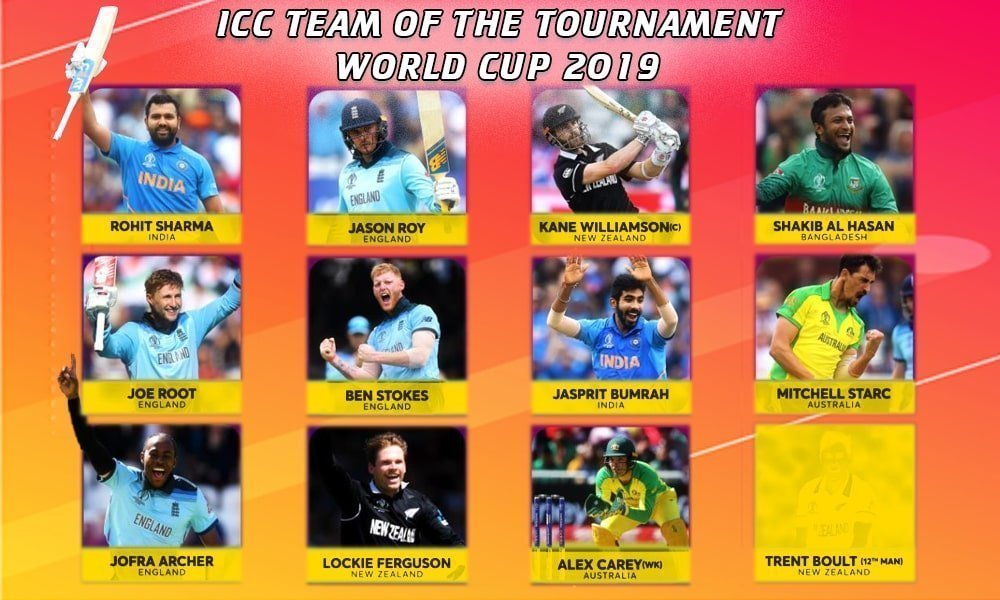 ICC Cricket World cup 2019 has been a rather joyful ride packed with suspense and thrill right till the end. The cricketing world witnessed one of the most unbelievable and unpredictable matches in the history of the game when England played New Zealand in the Final of CWC19.

ICC has recently announced their star-studded “ICC Team of the Tournament” featuring some of the best performers of the tournament.

It is delightful to the fans of Indian Cricket that two of their star players made it to the ICC Team of the tournament. Rohit Sharma (Hitman) and Jasprit Bumrah were selected in the Top XI for their splendid performances in the recent World cup event.

The final match between ENG vs NZ had some epic twist and turns starting from England losing their way in a small run chase then Ben Stokes came to their rescue, then the infamous 6 runs of Ben Stokes bat deflection upon a throw from the deep.

Match went into the Super Over and England scored 15 runs but New Zealand was up to the task and almost made it through when 2 runs were required of 1 ball of the super over. Guptill went for the obvious second run and was run out on the very last ball leveling the scores 15 all. But then came in the infamous crazy rule of ICC which states that if the super over does not decide the winner (There is a tie) then the team which scored most runs will win and, in this case, it was England which scored 26 boundaries won the Final match becoming the ICC World Champions.

What do you think of this selected team of the tournament? Write in the comments who else should be in the team.

Rohit Sharma, Gambhir and Yuvraj Not happy with ICC
New ICC Player ranking for ODI cricket is out! Here are the top players.