The Cold War Between Rohit Sharma and Virat Kohli

Virat and Rohit are the two aces of the Indian cricket team and perhaps that’s the problem here as there can’t be two Aces in one house of cards. Here is the history and the reasons behind the rift. 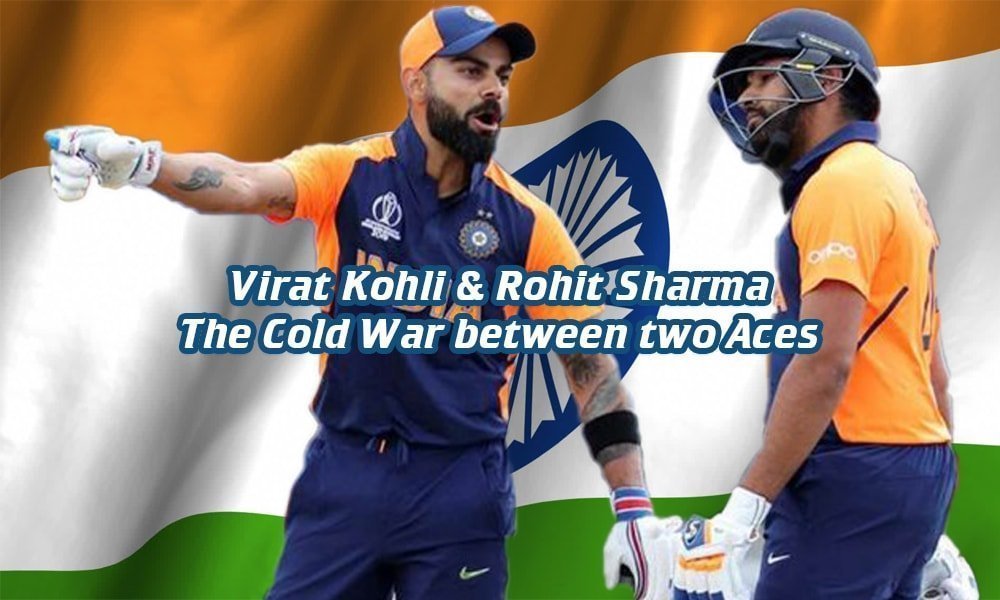 It has been a while now since the unexpected exit of Team India’s from the World Cup 2019 event. Fans might have forgotten it but maybe the players haven’t. Recently there have been many reports of some rift going on between Rohit Sharma and Virat Kohli.

Virat and Rohit are the two aces of the Indian cricket team and perhaps that’s the problem here as there can’t be two Aces in one house of cards. Many have raised the question if there is some rift between the two

What led to the Rift between Rohit and Virat?

Indian Team was perhaps the most favorite team to win the world cup as the World cup event entered the Knockouts. However, the unbeaten side went downhill during their last few games, where there were no convincing performances from the top order including Virat Kohli, However, the only consistent performer was Rohit Sharma with his 5 centuries (world record) scoring 600 plus runs in those 5 innings.

India had a shocking exit, where they lost to New Zealand in a low scoring game involving one of the worst top-order collapses from Team India. And Like always, though the team performed fairly well in the tournament, this poor knockout raised many questions of change in the team and management. There was also criticism of Virat’s individual performance and also his performance as a captain. Virat Currently captains all three format teams for India. There were a lot of shouts for making Rohit the new captain for the Test side which didn’t happen, and many believe that Virat is not letting it happen. Virat’s and the Head Coach’s term duration was also till World Cup and the contracts had to be renewed afterward. BCCI announced the hiring of new head coach and management however Virat was automatically selected as captain.

Many believe it all started during the world cup and both players are not getting along personally where there are two groups supporting Virat and Rohit within the dressing room.

What does Virat Think?

There has been a complete denial from Virat Kohli at least. In his recent interview, he said such news to be ” Baffling and Rediclulous“. At one point he said.

“In my opinion it is baffling to be honest. It is absolutely ridiculous to read such stuff that comes out there,”

Virat on his departure to West Indies for a (3 T20I, 3 ODI, and 2 Test) tour have said that that “We are overlooking at the facts and over analyzing and we are putting a blind eye towards all the good things”. Virat also added that without good dressing room atmosphere, the performances which they were able to put up could not happen and they (Team India) were simply played some great cricket during the world cup event.

What Does Rohit Think?

Rohit has been quiet all along, however, he has shown some clear signs that he is certainly not happy about something. Here is his recent tweet giving some idea of what is going through his mind.

Rohit Sharma also recently dropped another clue of his unhappiness by unfollowing the wife of Virat Kohli (A renowned Bollywood actress) on tweeter. This was also a clue dropped in by Rohit Sharma, apparently disagreeing with the Virat’s Public narrative of “ALL IS WELL”. when it clearly isn’t!

What do others think? Heres what Kapil Sharma has said

Kapil Sharma the Star Ex Indian All-rounder and skipper of the of 1986 winning squad also expressed his viewpoint upon the whole controversy. Heres what he had to say about the whole issue. He said

” You Media have to do your job, Thora bohat tou app be help kertay ho rumors bananay main” (Media also helps in making such rumors). When you are inside the ground I can talk about them, I can talk about myself when you are batting there is no fight. Off the field, your thinking can be different, the approach can be different. But when you are playing, there is one aim, how you can win the match. That is important. The difference of opinion does not mean you are pulling someone down “

The Latest news on Rohit Sharma and Virat Kohli Rift

As the team was departing for the West Indies tour where they have to play 3 T20I, 3 ODIs and 2 Test matches, Virat Kohli’s shared pictures of his squad, and unsurprisingly there was no Rohit Sharma in the pictures. In fact, there was not a single instance where both players were spotted together.

Steve Smith on his Redemption journey
Steve Smith the only wall in front of England to climb.