The Border–Gavaskar Trophy is a Test series played between India and Australia. It is currently played via the International Cricket Council’s future tours program, with varying lengths of time between matches. If the series is drawn, then the country holding the trophy previously retains it. The series is named after Australia’s Allan Border and India’s Sunil Gavaskar, the first two test cricketers to have scored over 10,000 Test runs in their respective careers, former captains of their respective teams, and were both world record holders for the most career runs scored in Test match cricket. 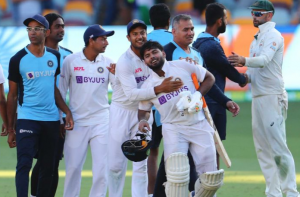 The amount of congratulations are coming from all over the world, especially cricketers….here are the highlights…

You don’t just play & love test cricket for nothing.

One of the greatest test series wins ever. Congrats India and well played Australia, what a series #INDvsAUS

One of the greatest test series wins ever. Congrats India and well played Australia, what a series #INDvsAUS

WHAT A WIN!!! Yessssss. To everyone who doubted us after Adelaide, stand up and take notice. Exemplary performance but the grit and determination was the standout for us the whole way. Well done to all the boys and the management. Enjoy this historic feat lads. Cheers 👏🏼🇮🇳 @BCCI pic.twitter.com/CgWElgOOO1

Just a remarkable win…To go to Australia and win a test series in this way ..will be remembered in the history of indian cricket forever ..Bcci announces a 5 cr bonus for the team ..The value of this win is beyond any number ..well done to every member of the touring party..

Proud to be a part of this unit 🇮🇳 pic.twitter.com/bZZupXEAfE

Good evening from Gabba!! I am sorry I couldn’t play here but thanks for hosting us and playing some hard cricket during these tough times. We will remember this series forever! @tdpaine36 @CricketAus

For all of us in 🇮🇳 & across the world, if you ever score 36 or lesser in life, remember: it isn’t end of the world.
The spring stretches backward only to propel you forward. And once you succeed, don’t forget to celebrate with those who stood by you when the world wrote you off. pic.twitter.com/qqaTTAg9uW

This is a win we’re never forgetting, this is a win for the ages! So proud of this team, Jai Hind 🇮🇳 CHAMPIONS🏆 pic.twitter.com/9KzLG28QaJ

We are all overjoyed at the success of the Indian Cricket Team in Australia. Their remarkable energy and passion was visible throughout. So was their stellar intent, remarkable grit and determination. Congratulations to the team! Best wishes for your future endeavours.

india vs australia highlights 2nd t20 2020
Which is the Best Sports book for Cricket?