IS VIRAT KOHLI THE NEW SACHIN?

Many rank Virat Kohli as the new Sachin Tendulkar. But is it true, Does he match the master class of little master? What do the numbers say? 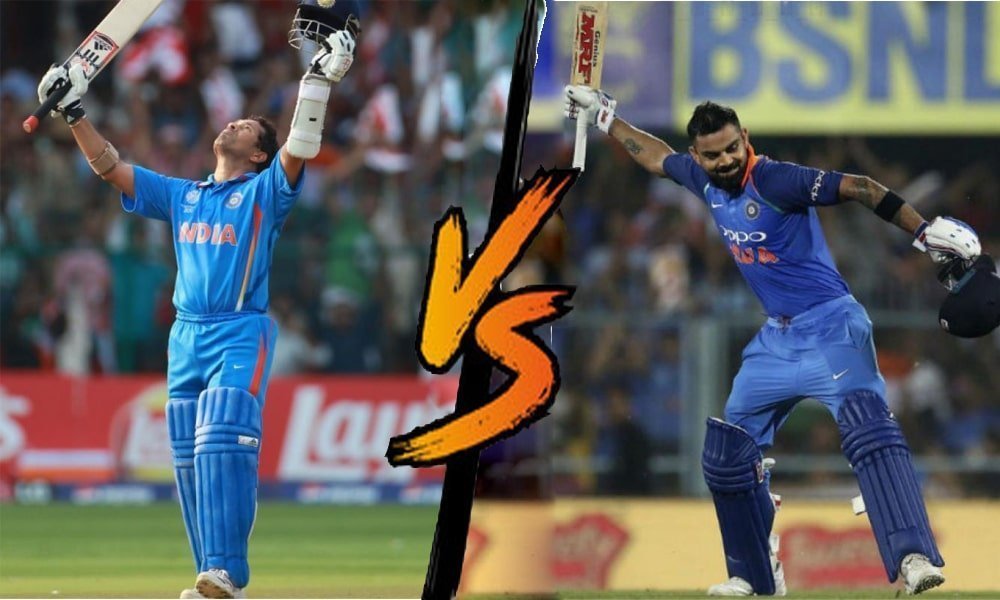 In the game of cricket, India produced so many legends in the past who made so many contributions, Today Team India is considered as one of the best teams in the world. India has always been a dominating force with the bat rather than the ball. Over the years Indian Team has produced some of the very finest players of the game such as Kapil Dev, VVS Laxman, Rahul Dravid, Navjot Singh Sidhu, Azharuddin, Ajay Jadeja, Sachin Tendulkar, and the list is on. However, In Today’s day and age, Virat Kohli is the best batsman in the world right now and there is no disagreement on that. But the Cricket fans and analysts across the globe ponder on this modern master with the legend Sachin Tendulkar.

Many rank Virat Kohli as the new Sachin Tendulkar. But is it true, Does he match the master class of little master? What do the numbers say? Let’s look at the stats of both the great players.

Sachin Ramesh Tendulkar generally is known by the name “little master” around the cricket world. He is from Bombay (now Mumbai), Maharashtra, India born on April 24, 1973. He was the right-hand opening batsman of the Indian team for about 24 years. His brilliant career said it all that how great batsman he was in his time. He played for India, Mumbai Indians, Mumbai, Asia XI, Marylebone Cricket Club, and Sachin Blasters during his entire career. He made his test debut against Pakistan in November 1989 at the National Stadium Karachi, while he played his last test against West Indies in November 2013 at Wankhede Stadium Mumbai. He made his ODI debut against Pakistan in December 1989 at Jinnah Stadium, while he played his last ODI against Pakistan in March 2012 at Shere Bangla National stadium. He played his only T20 match against South Africa in December 2006 at the Wanderers Stadium. His 24 years long cricketing career had so many ups and downs but he somehow managed to get so many records to his name.

STATS AND RECORDS OF THE GREAT SACHIN TENDULKAR:

Sachin Tendulkar is the leading run-scorer of all time in international cricket. He also scored 100 centuries (100), most by any international cricketer. He played 200 test matches, 463 ODI, and 1 T20. The number of matches he played said that how great batsman he was.

Virat Kohli is generally known by run machine, chase machine to the cricket world from Delhi, India born on November 5, 1988. He is the right-hand top-order batsman of the Indian cricket team and also the captain of the Indian cricket team. He plays for India, Delhi, India Red, India U19, Royal Challengers Bangalore, Board President’s XI, North Zone, Indians, India A. he made his ODI debut against Sri Lanka in August 2008 at Rangiri Dambulla International Stadium, while he made his T20 debut against Zimbabwe in June 2010 at Harare Sports Club. He made his test debut against West Indies in June 2011 at Sabina Park. His short but brilliant career is full of achievements, records, and awards. Let’s take a look at his achievements, awards, and stats.

STATS AND RECORDS OF THE VIRAT KOHLI:

Virat Kohli is his small career, achieve so many great achievements. He captained India U-19 team in 2008 and led his team and become champions. At a very small age, he was able to achieve this great achievement. He is the first batsman to score 20,000 international runs in a decade. His average was mind-blowing in every format. He is rank no. 01 in the test format as well as in the One Day Internationals. He plays 77 tests, 239 ODI, and 70 T20 matches.

SHASTRI REAPPOINTED FOR TWO YEARS, VIRAT KOHLI’S ROLE IN SELECTION?
Shoaib Lashes out at Jofra Archer calling him “Not Nice”